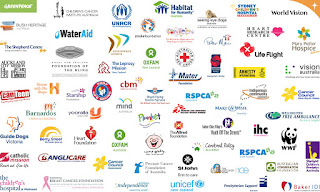 Yesterday, while I was walking through the city, I was stopped by a woman wearing a UNICEF shirt asking if I'd like to contribute to their cause. I informed her I already sponsored two children in developing countries and gave regularly to half a dozen others. Her response was "well that's nice but what about us? Can't you do the same for us?". At the time I was really incensed. I felt like she was implying that I don't give enough financially and when I declined giving to them that made me a bad person. I walked away quite annoyed at the exchanged that happened between us. Today, as I read a letter from my sponsor child I realised that she probably wasn't attacking me personally but rather was just very passionate about an organisation she believed in. It's so important that we have people passionate about all different causes to advocate for them. I am very thankful we have these charities for causes both nationally and internationally. If we all just chose something we are passionate and donated to that cause by whatever means, the world would be so much richer for it.
Posted by Unknown at 03:36