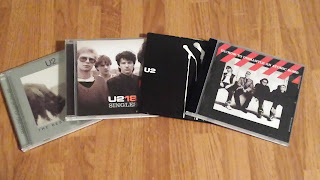 My favourite band in the whole universe... U2. I have my best friend to thank for that, she introduced me them to me when we were probably still in primary school. They have been around as a band longer than I have been alive, but there's just something about their music and their lyrics that really speak to me. I can't name a song of theirs I don't like. When I was 19 I had an opportunity to go to my first ever U2 concert for their Vertigo Tour. The concert was meant to be held early on in the year, but due to one of the members experiencing an illness of a family member, it was postponed until towards the end of the year. Little did I know that same year I would go through one of the most difficult times in my life, being very unwell and diagnosed with a heart condition. Looking back on it now, the U2 concert at the end of the year was a really significant blessing for me. It was almost a symbol of the struggle I'd been though, coming through it on top and finishing it all off with this amazing concert that I was actually able to really enjoy in good health. I was also able to attend their U2 360 tour which was just as incredible. Not only are they are great band though but the members are also involved in a lot of charity and aid work. So, listening to one of their CDs this afternoon I can be thankful for U2, for their music and there contribution to those in need. Too bad they weren't in Dublin when I was there.
Posted by Unknown at 03:02