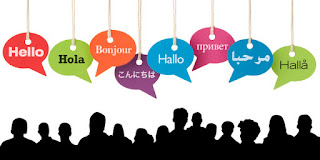 Because I was a little bored last weekend and keen to do something this weekend, I put the call out to see who was available to catch up and hang out - well it was a text but you know what I mean. One of my friends suggested we go to the Arab Film Festival. Why not? Something really different. We ended up seeing two Egyptian films, one short and one feature length. They were both in Arabic, obviously, but the subtitles were easy enough to read. I really enjoyed both films! They were both light hearted and a little funny, the longer film reminding me of Love Actually a little. I love listening to different languages. I've tried learning French on several occasions, and tried to pick up bits of Spanish, Portuguese and Arabic when I was travelling. Different languages makes the world a much a more interesting place, don't you think? One day, I'd like to perfect another language, whether it's French or otherwise. This makes me so thankful that there are so many different languages spoken by people all around the world. Besides, I do like a guy with a bit of an accent ;)
Posted by Unknown at 03:07