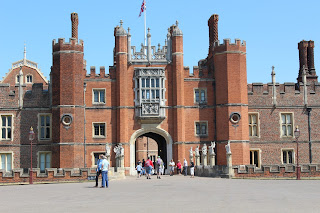 After such a long day yesterday, I was grateful to have a sleep in and easy morning. My sister was working half the day so I hung around at her place until she came home. We spent a few hours this afternoon at Hampton Court Palace. Originally belonging to the Order of St John of Jerusalem it was redeveloped into a palace in 1514 and eventually became the residence of King Henry VIII (probably one of the most well known English monarchs) in 1529. It continued to be inhabited by the British Royal Family until the 18th century. Nowadays its a museum and sometimes used as a film set. My sister and I had a great time exploring the numerous rooms and sprawling gardens, though the famous 'first tennis court in the world' was closed for maintenance. Shame. There was even a room purely devoted to the making of chocolate! I need a chocolate room in my house! And a chocolate chef for that matter. Given my love of history I really enjoyed exploring this palace, and sharing the day with my sister made it all the more special. We even capped off the day with a late lunch/early dinner at this great Italian restaurant. I am thankful for Hampton Court Palace and places of history like this, and for the afternoon I was able to spend with my sister. The only other thing I could have asked for was to not be sick so I could have joined her and her partner at the pub tonight.
Posted by Unknown at 04:36