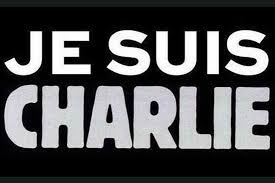 Today we woke up to the news that an atrocious incident had happened in France. Several men armed with guns stormed the offices of a satirical magazine Charlie Hebdo, opened fire and killed 12 people while wounding several others. The motive for this attack was that the magazine made fun of the prophet Muhammad and the perpetrators of the attack were Islamic extremists believing they were seeking retribution. This sickening act, as awful and tragic as it is, has united the world in favour of free speech, letting extremists like these men know that the world is not afraid of them, that they're actions are not going to silence. People in Paris and other parts of France took to the streets to proclaim this stance. One of the interviews on the news was of a Muslim gentleman who was in the march. He said something like "I don't like the things that Charlie Hebdo write, but I respect their right to do what they do. Violence has no place here". Personally I'm not a huge fan of satire and as a devout Christian, I cant say I would be a fan of a magazine that makes fun of any biblical character, and I believe this particular magazine made fun of many political and religions figures. However if you don't like it, ignore it. Don't read it. Simple! The wonderful thing about freedom of speech is I am able to freely express my beliefs as a Christian, weather people agree with it or not. It's a two way street and I feel blessed to live in a country that accepts freedom of speech. Not everyone will always agree with everyone's point of view. When it comes to religion and faith it can become quite a touchy subject. However if you are devout to your beliefs it should not matter what someone else says or does to disagree, discredit or make fun of. Sure it can be offensive but the only persons actions you are in control of is your own. I am thankful for freedom of speech, for the ability to have my own mind and express my own opinions. I am thankful for times of tragedy like this that unite the world to say we are not afraid.