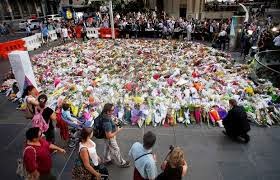 *Photo from the internet

In stark contrast to yesterday's post, we here in Sydney, in Australia and around the world witnessed a truly terrible event. Yesterday in a cafe in Sydney's CBD, a man walked in and held the cafe to ransom, it's patrons became hostages. In the early hours of the this morning, after a 17 hr siege, it all came to a dramatic and tragic end as we learned two of the hostages lost their lives, protecting those around them. The gunman also lost his life. By all accounts it seems this man was a radical extremist who associated himself with Islam, though due to his warped sense of reality looks like he may have been very mentally unstable. And in the end what did his actions achieve? If they were to separate the Muslim community and the rest of Australia, he failed miserably. That's the most incredible thing, people began to show complete compassion and unity afterwards. His actions achieved quite the opposite. The people of Australia were saying "we know this was the actions of one man and not of a religious community. We will stand by you, love you and together will overcome this hate and violence." There was even a hashtag started - #illridewithyou - to show solidarity. Multi-denominational faith services were held and thousands of bouquets of flowers were left at the site of the siege to pay respects to those who died, flowers left by people of all races and religions, by Australians. A sea of beautiful colour. The words and actions of one person should never define a community of people. No religion I know condones hate and violence, but people from all religions and groups are capable of it. Hate begets hate, we can only conquer hate with love and unity, and I am thankful that I what I saw today.
Posted by Unknown at 04:02