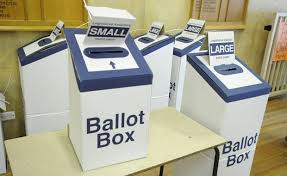 I don't follow politics. It's just not my thing, no offence to anyone reading this with a passion for it. And I dislike having to vote. Although in saying that, it usually doesn't take long and isn't a real inconvenience. We had to vote in a state election today and to emphasise my lack of interest I even put an alarm on my phone so I wouldn't forget to vote! When I arrived at the polling booth I only recognised one name on the ballot paper, not because I knew of him or his policies, but he was the only one in my area that had signs with his face on them placed everywhere for the last few weeks. After I finished the whole voting process and was thankful it was over, I was reminded of how blessed I am to live in a country when I CAN vote. How lucky are we here in Australia where, to some extent, our views and opinions can be heard? And not only that, I'm lucky that as a woman I can vote, which wasn't always the case. There are many places in this world where people don't get a say in how their country is run, and women are oppressed and not given the same rights as men. That's not here. That's not Australia. So after this election I thought to myself how thankful I was that I could vote and that my vote counted (no, I didn't donkey vote!), whatever the outcome. I will, from now on, pay more attention to what's happening in future elections, so I can make an informed choice when I vote next time.
Posted by Unknown at 03:07