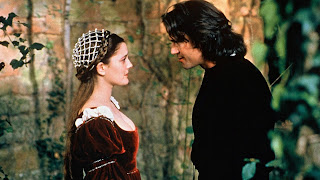 *Still from the movie.

On call again. Just today though. I'm actually quite glad because I am absolutely smashed from this past week. It took me until 10:30am to force myself out of bed, even then I didn't do much. I did however watch my favourite movie, Ever After. I don't remember the first time I watched it, nor could I tell you how many times I've seen it. But I can tell you why I love it. If you haven't seen it before, it's a movie from the late 90's that's a spin on Cinderella set in the middle ages. Drew Barrymore plays the main Cinderella type character. You know its the standard boy meets girl, not from same social circles, drama drama drama then happy ending. Sorry for the spoiler. What I love about it is the female protagonist isn't your typical fairytale damsel in distress. She is kind, compassionate and genuine yet strong, intelligent, would do anything for the ones she loves and is more than capable of looking after herself. Then the main 'Prince' character is great too. Initially he is immature, selfish and has no direction in his life even though he is to be king one day, but through getting to know and fall in love with the female character, he grows and finds his way. He doesn't rescue her. They become a team and compliment each other. The way a real relationship should. I just love Drew's character and think it's such a good role model for girls. I also love the classical soundtrack too. Today I'm thankful for Ever After and that no matter how many times I watch it, I love it every single time.
Posted by Unknown at 03:43